Skip to content
At the end of the last quarter, we embarked on a process of extending our sphere of impact to the policing fraternity. Today, 5 May 2021, saw us cementing our relationship with the Zimbabwe Republic Police by donating some musical, information and technology equipment and groceries to the Police Headquarters National Chaplaincy Department. Part of the chaplaincy duties includes taking care of orphans and widows of the departed members of the police. We noted that some orphans and widows travel long distances to access help at the National Chaplaincy. During our many visits to the chaplaincy offices, we observed that the Chaplain General’s office had no teas or refreshments to offer these widows and orphans who would have travelled from far away places- some travelling overnight. So, we made sure that among our donations there was a package for teas and refreshments. The Chaplain General, Rev Dr Doyce likened ZimWorX to the Biblical good Samaritan, who did not only see the plight of the man who was left for dead by the brigands on his way to Jericho but generously helped the man. The Zimbabwe Republic Police, like everyone else, has not been spared of the economic sting. Operating in an environment characterized by public hostility and scarcity of resources, they are still expected to execute their mandate with diligent professionalism. ZimWorX, through the Ministry arm, saw the plight of the police force and generously reached out with a helping hand. The ripple effects of this donation will reach close to 50 000 members of the police force. 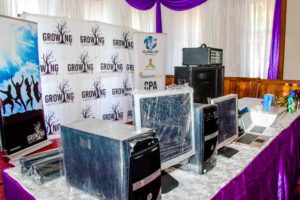 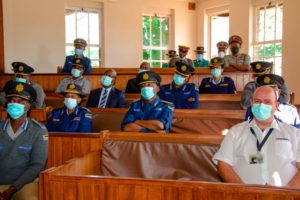 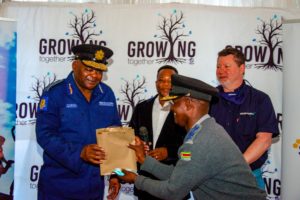 The police chaplaincy department plays a pivotal role in the organization. It is the department that offers spiritual and welfare services to the police force and their dependents. It is also the department that oversees the Commissioner General’s welfare fund, a fund that caters for the orphaned and vulnerable members both within the police force and in society at large. Most important of all, the chaplaincy department takes care of the police forces hearts, spirits and souls. In his address, our General Manager, Bradford Smith underscored the indispensable role that chaplains play in the force; “The police’s heart, the police’s spirit, the police’s soul, are everything. Unless the police’s soul sustains him, he cannot be relied on and will fail himself and his commander and his country in the end”. As ZimWorX Ministry we have taken this step as an exhibition of faith in action. This was reiterated by the Commissioner-General in his address when he quoted James 2: 14-17 “What does it profit, my brethren, if someone says he has faith but does not have works? Can faith save him? If a brother or sister is naked and destitute of daily food, and one of you says to them, “Depart in peace, be warmed and filled,” but you do not give them the things which are needed for the body, what does it profit? Thus, also faith by itself, if it does not have works, is dead”. The chaplaincy department has been heavily incapacitated. Our intervention was timely and it will go a long way in motivating, not just the chaplaincy department but the entire police force. We deliberately targeted the chaplaincy department because our donation was not just a charitable gesture but an exercise in Ministry- an exercise deeply rooted in our Growing Together Culture.